For Cindy Sheehan who gave voice to a movement

For Patrick Fitzgerald for being hard working and tenacious

For Jack Murtha for speaking out loud and clear

And most of all for my new grandchild and her big sister
Posted by KitNeill at 12:47 PM No comments:

The calvary is coming!

After Howard Dean's campaign and watching John Kerry douse every fire of passion around him I could barely breathe from disappointment. I watched liberal Democrats petrified of saying or doing anything that could get them un-elected. I felt I had wandered into an alternate reality, where up was down and down was up.

I took a grown-up job out of politics and hunkered down. Oh sure the occasional CSPAN show or Jim Lehrer News Hour. The Bush Admin spewed lies and spin and spewed out talking points, the louder the better, to drown out dissenters. It hurt to watch. I licked my wounds. I stayed uninvolved, wondering how we got to such a mean-spirited place. In college I studied documentary film making and using film as propaganda, in part to help me understand how a Hitler could come to power. Slow and steady, blame others, eliminate opposition swift and hard, those were his tools. And I began to see the same thing happen here, wondering why our nation so full of decent and good people, lay dormant. They were given a diet of fear, of terrorists, of losing a job, of not being able to pay for college, and more terrorists.

Reporters covered handouts. They stood in a group, like so many buzzing insects, all reporting the same thing. A few brave souls managed to get in a few words but they were quickly extinguished. Howard Dean was brought down first by the DNC; his own party did not want a diversion from their steady drip of "same old same old."

Someone to believe in again. Patrick J. Fitzgerald, I salute you, for breathing air back into our lifeless bodies. Maybe you weren't the first, or even the loudest - although from the fear Bob Woodward showed, I guess subpeona power has some cache.

I stole this picture off a web site because it's really cool, and I want it on my site 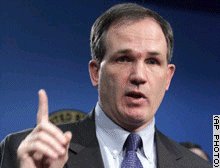 Then just when I'm happily sucking up all this new information along comes Rep. Jack Murtha, and wow, what a blast of plain talk.

Here is my favorite part:
"I like guys who've never been there who criticize us who've been there," Murtha said. "I like that. I like guys who got five deferments and never been there and sent people to war and then don't like to hear suggestions that what may need to be done."
Oops, I forgot the George Bush National Guard in Alabama part, but it's there in spirit.

My Meanderings is dedicated to the above persons and others who ring loud and true, this holiday week I have hope. Hope is our life force.

And yes, bring our soldiers home. Give them hope as well. They deserve that much, and far more.
Posted by KitNeill at 2:43 PM 9 comments:

I am appalled at Bob Woodward's total disregard for facts and the Washington Post readers. He has been blatantly spewing the Administration line. His loyalty is only to his book deal. He seemed awed by his access to George Bush. Well, duh, you became their shill.

He is no longer a reporter but a society columnist, reporting on gossip and handouts from politicians. He has become the story.

Journalism is in mourning today.
Posted by KitNeill at 4:51 PM 2 comments:

Ah well fun while it lasted. The world keeps spinning, onward and upward. Things change, things stay the same and some days all I do is get older.
Posted by KitNeill at 11:19 AM No comments: 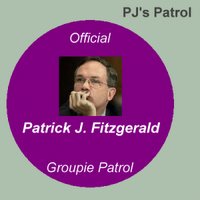 I noticed in the paper that all the big guns in the Bush Admin are out in force today, spinning their spin better than Will Rogers ever did his rope. They are exhalting our soldiers in canned speeches to safely Republican groups, heaping praise upon them - rightfully so - but wait, what is that rumbling sound of discord? These speeches give lip service to the value of our soldiers in order to drown out the countering argument that by cutting the VA budget, our returning soldiers will not receive full medical benefits; no matter that it's Iraq War related.

It's a cliche but it fits: Put your money where your mouth is!

Our soldiers are on the front line of a badly planned and horribly executed war. Many have lost lives and far more have lost limbs and even more will return home with post traumatic stress disorder. Hard to quantify but nonetheless real to the families. At the very least we owe them top quality treatment. That's how you support our troops, not with speeches but with action.

This Administration has more sparkle and glitz than a rodeo queen. And about as much substance. (My heartfelt apologies to rodeo queens everywhere, it is a worthy endeavor. I wanted to be one but my parents made me settle for a cute cowgirl outfit instead.)
Posted by KitNeill at 8:36 AM 2 comments:

The elections gave me hope. Voters are out there and they are paying attention. Betrayal is a funny thing, it cuts deep. When you promise to restore trust and dignity to the presidency - and while I adore Bill Clinton, I don't often use dignity in the same sentence - and then you lie about almost everything, well that betrayal starts seeping into pores.

Karl Rove wanted a conservative agenda out there. He searched for a candidate who could get elected. George W. Bush to the plate. Okay, he was an alcoholic failure, but he had that name. Clean him up, get him to church, pump him full of stump speeches, and get him governor of Texas. How hard is that? They don't mind failures, if they come from rich families. Part of the folklore. The rest is easy.

The Christian right was aching for a candidate with backing. Organize them, and denounce abortion and gay rights, count red state electoral votes and badda bing, ya got a viable candidate. (And it sure doesn't hurt that Daddy knows just everybody who ever won an election and your very own brother is Gov of a hell of lot of electoral votes.)

I read today that Karl and Dubya have been together 32 years. (Eeeuuuww, how gross is that...) This has been a steady march to power. Picking up Cheney and Rumsfeld, hell, that was just a side issue, might as well suck up some oil profits while you're at it.

I wish I weren't so cynical. I want to believe that they had a real plan, even if I disagreed with it. But they don't, they haven't a clue. Clueless in Washington. Okay, that's an oxymoron.

But just as I was wallowing in these thoughts of despair along comes first, Howard Dean - a bit noisy, sure, but hey he tells it like it is. Music to my ears. The Moveon.org spewed it all about and I knew I wasn't alone! Then watching Patrick J. Fitzgerald on TV I was practically cheering. Calvary to the rescue! We are saved! The Dems have finally gotten some gumption, they may actually put together a plan. Finally!

I burrowed down deep when Bush was elected. It simply hurt too much. The anger was too much. I had to turn it all off to survive. Body blows need time to heal.

Now, where's my horse? I'm off to do battle! (A war of words, not of fallen soldiers. I hate them for taking sons and daughters, husbands and wives, and calling it patriotism when greed is more accurate. Our soldiers deserve better leaders.)
Posted by KitNeill at 6:16 PM 3 comments:

Reagan succeeded and Bush tries to emulate by insisting everything is hunky dorey. Just follow me, folks, and life will shine. Like lemmings. Spin the spin, sucker punch the opposition. War is hell and keep driving those gas guzzling machines as Haliburton rakes it in.

To me, from day one, it seemed clear that Saddam was into the huge profits made from the oil for food bargain with the devil. Why focus on nuclear weapons - dangerous when wet - when billions are foisted on you in exchange for oil, er um excuse me, food.

Bush and Cheney are oil men and we invade an oil-rich country? Have we forgotten how to think? I blame the Democrats, too, they rolled over and played dead.

We are fighting a War over oil rights, couldn't we just for a year or two, think to lessen our emergy use? How many SUV's were sold since the War began? Can anyone justify a Lexus SUV with 2000 dead American soldiers?

There are those who like the Bush Swagger. It's arrogance without substance, a schoolyard bully in a suit and tie.

When Howard Dean burst onto the scene, I felt I could breathe again. Someone was out there, many as it turned out, to say the war is wrong, the administration is wrong. Lies are not policy. Arrogance is not control. Self-righteousness is not power.

I came of age during the Viet Nam protests. I am proudly liberal. I believe in people, at least in those people who try to do the right thing. I am so grateful to Patrick J. Fitzgerald for being straightforward and clean, for being competent and choosing to fight the bad guys.

This is my first post. I don't yet know which direction I will take. I am a political animal, it is my life force. The Bush era harkens to the Nixon era to the McCarthy era, when dissention was punished. Democracy is fundamentally dissention or the right to have it, anyway. Open discussion is why we are better and if we lose that we are worse than those who never had it.

I hope Karl Rove goes down in a ball of flames that engulfs GW. They got elected on a platform of restoring trust in government and as is often the case, when ya gotta say it, you ain't got it.

Right now I trust Fitzgerald. Knowing there are people like him out there brings hope.
Posted by KitNeill at 10:55 AM 2 comments:

A day on a horse is a day well spent.

I am Captain of my Ship